Chat with us, powered by LiveChat

That stunning and beautiful wrought iron front door you have on your home has a long and rich history. While the discovery of wrought iron did not occur until the Iron Age, which took place over 3,200 years ago, there was already wrought iron to be found on the planet.

The earliest civilizations that made this discovery were the Egyptians. They had discovered that the iron in meteorites that fell to earth had almost pure iron in them. As the meteorites passed through the earth’s atmosphere, the heat generated caused the carbon in the iron ore to be removed, creating iron that eventually would become known as wrought iron.

Other ancient European and Middle Eastern countries also used iron from meteorites to make a wide range of items, including:

Due to the limited number of meteorites, it would be some time before smelting processes would be developed to extract almost pure iron from iron ore.

What Is Wrought Iron?

The discovery of wrought iron occurred around 2 BC in Turkey. The Turkish had developed a smelting process to use with iron ore. During the process, the carbon on the ore was “burned away,” leaving almost pure iron. This iron then could be bent, pounded, and shaped into a variety of different objects and things.

The new iron was referred to as wrought iron because wrought was used to describe the processes used to work and shape the iron while it was still hot from the smelting process. By removing the carbon from the iron ore, the iron became stronger as it cooled. 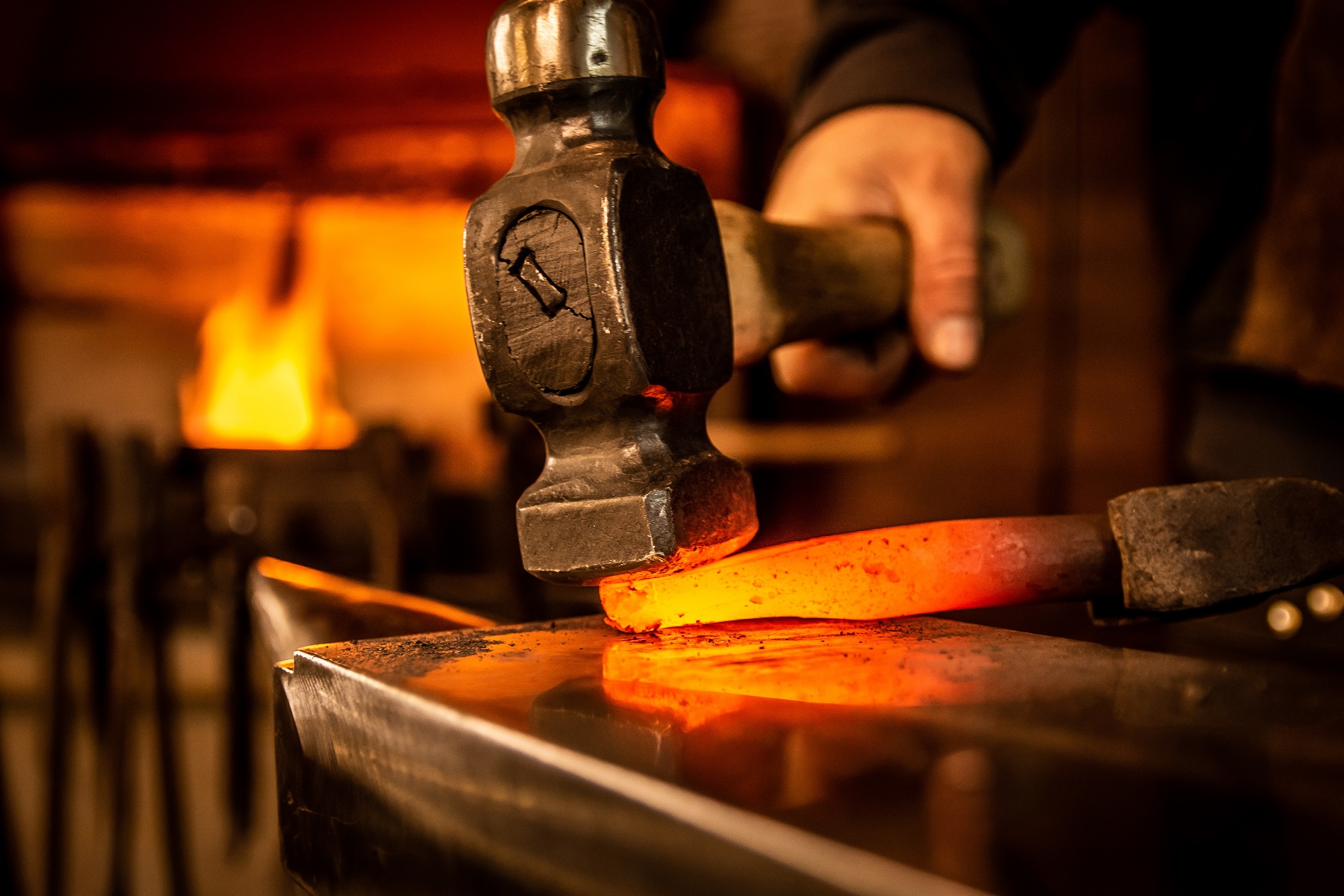 Wrought iron is very durable, and it was also discovered to be resistant to corrosion and rust. Since it is easy to work with, once someone had a smelter set up, it became a highly sought-after metal for a wide range of uses.

The basic smelting process of burning charcoal to heat the iron ore remained fairly unchanged until the late 16th century. It was at this time that the metal furnace was invented. The furnace allowed the iron ore to be heated to even higher temperatures, removing more carbon and making even stronger wrought iron.

With the invention of the new smelting furnace, wrought iron could now be mass-produced in larger quantities. From the 16th century on, wrought iron was used for:

First Use of Wrought Iron Doors

The first use of iron doors was during the Middle Ages around the 10th century. The wrought iron doors helped improve and fortify castles, towns, and other areas from invasions. The use of wrought iron gates also grew during this same time.

As people discovered the beauty of wrought iron, it started to become a status symbol of the upper-class. Elaborately detailed doors were created and used on various homes throughout Europe. Even cathedrals and churches started using wrought iron doors for their beauty. 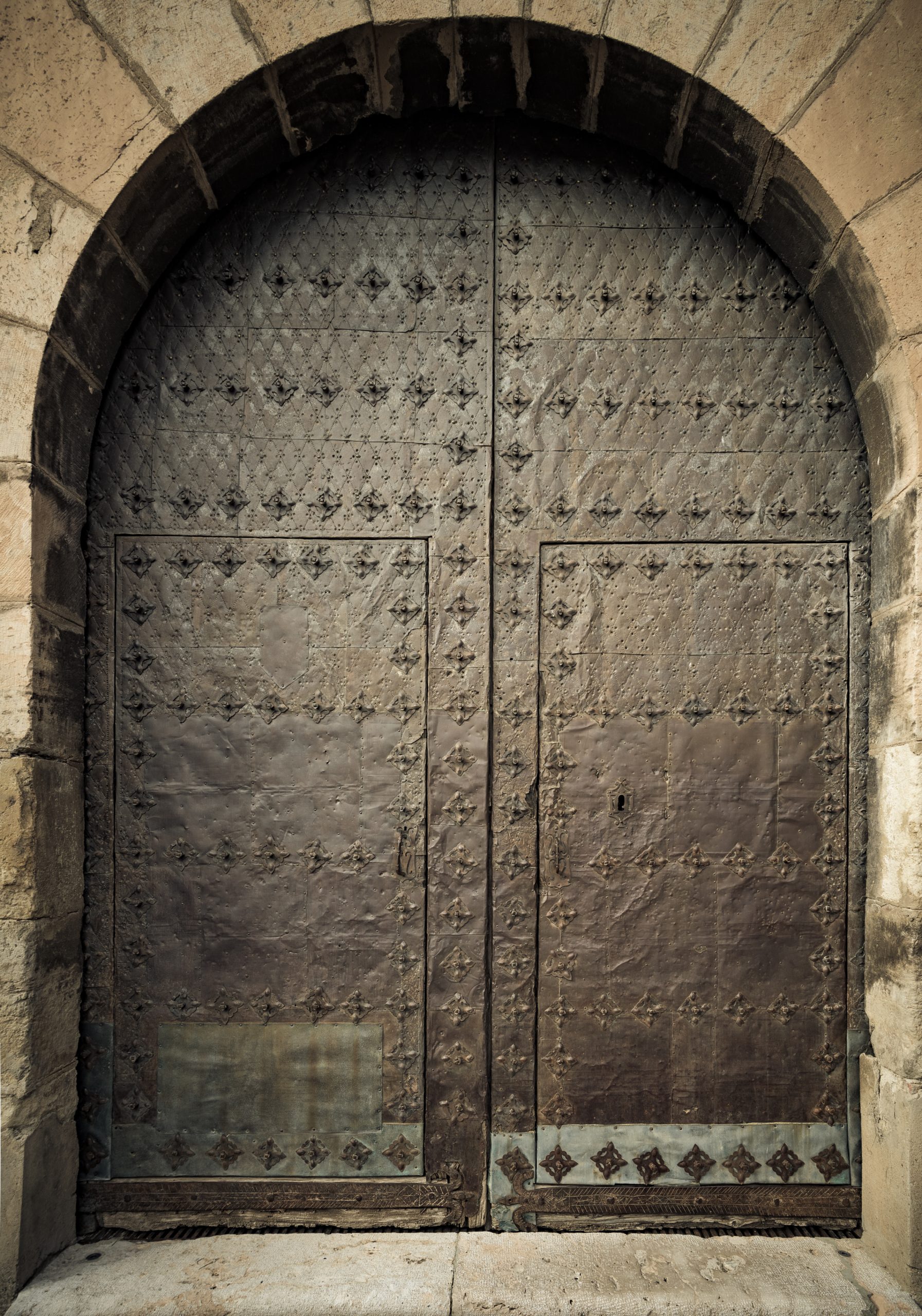 How Wrought Iron Made Its Way to the USA

Wrought iron was not huge in the USA until after colonization. Prior to this time, native Americans used abundant copper, gold, and silver to make tools, weapons, jewelry, and other objects.

After the discovery of the “New World,” it was the French who brought along the skills and smelters needed to make wrought iron. Thanks to the French, wrought iron gates, railings, doors, construction materials, and other items started to appear more frequently.

Just like in Europe, wrought iron ornate doors became a status symbol and were frequently found on the homes of the rich and influential people of the time. The first uses of wrought iron can easily still be seen today in New Orleans, Boston, New York, and other early settlements.

Modern wrought iron is not pure wrought iron as it was in the past. The last production facility in the USA ceased operations in 1969. Part of the reason was the labor-intensive process needed to make true wrought iron. A metalsmith would have to constantly work the iron during the smelting process to remove as much carbon as possible.

True wrought iron can still be found in Europe. So, if you have your heart set on true wrought iron, you could always have it imported, but be prepared to pay an excessive amount for it. Another option is to recycle true wrought iron. However, re-smelting the iron causes it to not be as strong as it was before it was recycled.

Mild steel can be bent, rolled, shaped, and transformed into the same things as wrought iron, including wrought iron front doors, gates, and fences. One minor difference is mild steel is not as rust-resistant as true wrought iron.

However, during the smelting processes, the finished product is coated with a galvanized finish which protects it from rust. After galvanization, the metal can be painted just about any color or left in its “natural” state. 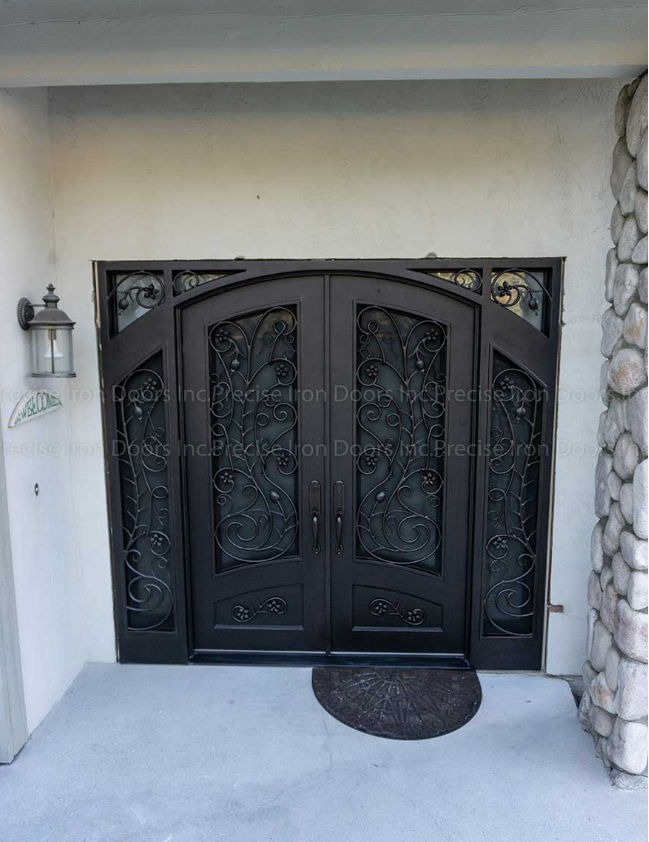 Wrought Iron or Rod Iron? Is There a Difference?

Some people get wrought iron confused with rod iron. Don’t feel bad, as this occurs quite a bit. The key difference is in the type of iron and how it is formed. Wrought iron is hammered, rolled, and shaped into the desired object, such as a door.

Rod iron, on the other hand, is iron that has been made into rods, similar to rebar. The rod can then be further processed so that it is broken down into smaller pieces to make nails. When you want modern iron doors for your home, you want wrought iron doors, not rod iron doors.

There are several different styles of wrought iron doors you can choose from for your home, including:

Wrought iron has come a long way from when it was first discovered in meteorites over 3,200 years ago. Thanks to the Iron Age and advances in metal smelting, wrought iron became a highly sought-after material for a wide range of purposes, including doors.

Even though what we call wrought iron today has changed, the end product is still just as stunning and beautiful. To learn more about modern iron doors and door styles or to create custom iron doors for your home, please feel free to browse our website or contact Precise Iron Doors at (818) 536-7690 today!